WASHINGTON — Having lost his cash advantage, President Donald Trump has entered the final stretch of his re-election race facing a perfect storm of fundraising headwinds, including a base of big donors who are maxed out, choosing to sit on the sidelines or shifting their resources to increasingly competitive Senate […]

WASHINGTON — Having lost his cash advantage, President Donald Trump has entered the final stretch of his re-election race facing a perfect storm of fundraising headwinds, including a base of big donors who are maxed out, choosing to sit on the sidelines or shifting their resources to increasingly competitive Senate races.

Trump raised $210 million in August — a sizable sum, but far short of Democratic nominee Joe Biden’s $365 million haul. Despite the president having a nearly three-year fundraising head start on Biden, both campaigns at the end of July had nearly the same amount of money remaining in their war chests. Neither campaign has released their full financial filings for August.

Now, heading into the final weeks of the race, many major Republican donors have reached the limit on how much they can legally give. Others are hesitant to give more after seeing the campaign burn through $800 million this cycle only to trail Biden nationally and in key swing states in polls. At the same time, donors are being solicited to contribute to a growing number of Republican senators facing tough races, with several major Trump donors from 2016 pivoting their resources there.

“It’s crushing that the financial advantage that we had has completely evaporated,” said Dan Eberhart, a major Republican donor. “I feel like that is a crushing blow to Trumpworld right now.”

Trump, a self proclaimed billionaire, said Tuesday he’d be willing to put his own money into the campaign, if needed — a move he used in 2016 to boost confidence about his prospects for winning. Bloomberg News was first to report that Trump was discussing giving $100 million to his campaign. It’s the same amount he repeatedly pledged to give in 2016, though his actual total contribution was $66 million, some of which was only wired to the campaign in the final days of the race.

Trump campaign officials say they have enough money to get through Election Day — downplaying the importance of money in the race while highlighting where and how they are spending, including $200 million on ads they plan to run over the next two months. Regardless of who wins the money race, both campaigns are expected to spend more than $1 billion combined trying to reach a million voters in the battleground states, said a person close to the Trump campaign.

“If money was the only factor in determining the winners and losers in politics, Jeb Bush would have been the nominee in 2016 and we’d have a President Clinton right now in the Oval Office,” said campaign manager Bill Stepien in a call with reporters Tuesday.

But the campaign has been acting like an operation stretched for resources, and one person close to the re-election effort said there had been a noticeable shift in how money is spent since Stepien took over as campaign manager in July. The campaign has gone off the airwaves twice in key states to conserve cash and redirect ad dollars to states that have early voting. He’s also cut spending on a range of smaller items, like how many staff go on trips and food expenses.

“We are now carefully managing the budget,” Stepien said. “I consider it to be among the, if not the, most important tasks for any campaign manager. Creating and recreating the budget was the first thing that I did.”

Trump has been using his advantage as the incumbent to save cash, as well. In choosing the White House for his convention speech, Trump said it was the most “cost-conscious” location. The president has also increasingly used official White House events paid for by the taxpayer to deliver attacks on Joe Biden — like during a World War II commemoration trip last week in North Carolina — blurring the lines between where his political activities stop and his presidential duties begin.

“You can’t underestimate the immense platform we have as an incumbent to get our message out and project a presidential message for free through simple press conferences, regular coverage of events, you can’t underestimate it,” said the person close to the campaign. “That is worth billions of dollars.”

Trump, who has not embraced virtual fundraising during the pandemic as his opponent has done, will be traveling this weekend on the campaign’s dime to raise money in Las Vegas, the hometown of Republican mega-donor Sheldon Adelson.

On Tuesday, he justified the heavy wave of spending this year, tweeting that it had been necessary to “counter the Fake News reporting about the way we handled” the coronavirus. One person close to the campaign suggested Trump would be down even more in the polls had it not been for the money the campaign spent defending him over the past year.

But donors and strategists say they see plenty of wasted money that has caused them to consider places their dollars could be better put to use. A New York Times report this week chronicled a series of questionable spending items, including a car and driver for Trump’s former campaign manager Brad Parscale, $110,000 on magnetic cellphone pouches to prevent donors from secretly recording Trump, and tens of millions of dollars on legal bills.

“At this late stage, people would be lining up to make last-minute contributions when they are feeling it is a close race and they can make a difference. But right now, they don’t feel like it can make a difference and say: ‘Jeez, am I just flushing this down the toilet. Is this just going to legal bills?’” said one Republican strategist.

The strategist said they recently advised a client to use money they were going to give to Trump’s convention on a Republican Senate race instead. Eberhart said he is also shifting his focus to the Senate and sees other donors doing the same. A number of GOP senators are facing tough re-election bids in seats once considered safe, like Sen. Joni Ernst in Iowa and Sen. Martha McSally in Arizona.

The National Republicans Senatorial Campaign Committee has been seeing an uptick in donations over the summer and has been outpacing its Democratic counterpart this election cycle, according to election filings through July.

That type of spending, along with Trump’s tumbling poll numbers over the summer, contributed to lower morale among donors. But the campaign has been working to try to turn that impression around under Stepien.

“Two months ago the feeling was pretty pessimistic amongst the donor class and that wasn’t limited to just donors, it was the operatives, the White House staff, a lot of folks were not feeling great about where things were,” said the person close to the campaign. “We are steadily clawing our way out of the hole we were in over the summer.”

After nearly four years of fundraising, some small and mid-sized donors have reached the $2,800 limit they can give to the campaign. A letter from the FEC to the Trump campaign listing donors who have exceeded their legal limit is more than 850 pages long, far more than the list of Biden donors who have maxed out.

Meanwhile, a number of Republican mega-donors, some of whom gave heavily to Trump in 2016, have largely stuck to the sidelines this time around, according to campaign filings through July.

With big donors directing their cash elsewhere, the Trump campaign — which said August, including the GOP convention, was its largest online fundraising month ever for the re-election effort — has been left increasingly reliant on those smaller donors.

But they’ve hit a roadblock there as well. In the past, the campaign had used the president’s large rallies to scoop up donations from people waiting for the event to begin, and to expand their database of small-dollar supporters. But with the pandemic, Trump has been holding much smaller events, drawing fewer new potential backers.

The pandemic has also left 27 million people nationwide out of work, and others feeling less financially secure, putting a strain on small donors.

“To a waitress in a coffee shop, $10 to them is like $100,000 to Sheldon Adelson,” said the Republican strategist. “They read about a guy with a car and a driver and see the polls start to drop. There is a lot of sensitivity with small donors.”

Sun Oct 4 , 2020
Well, then. Chinese officials are reportedly encouraging citizens to get out and adventure in a “revenge travel” pitch to revive tourism and boost the economy, following months of lockdowns and restrictions in the fight against COVID-19. Starting Thursday, about 550 million people are expected to travel for China’s National Day and […] 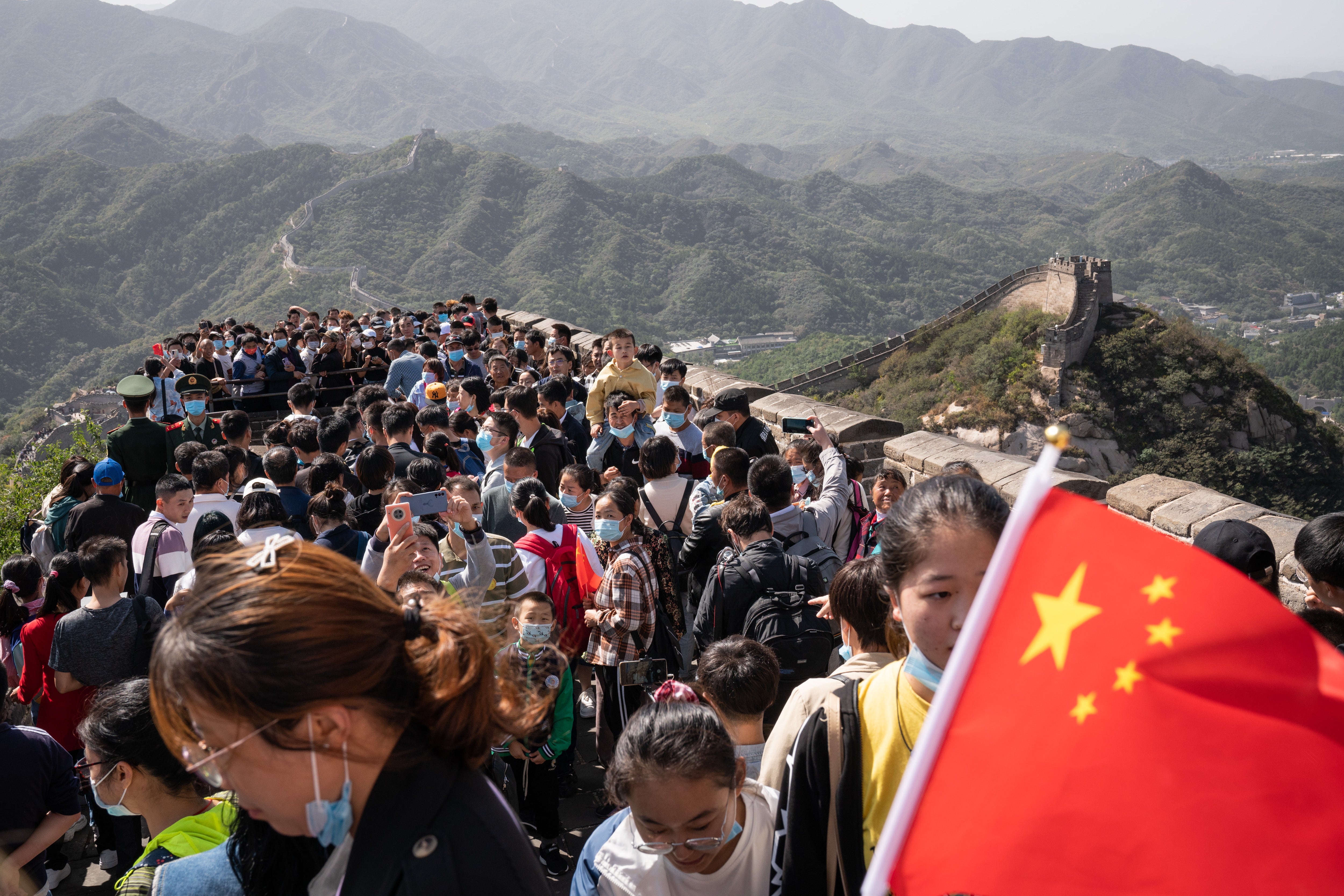