The stock market rebounded on Wednesday from its late Tuesday swoon. Investors regained confidence that there would eventually be some sort of further economic stimulus package from the federal government, even if it might end up getting delayed temporarily. Gains for the Dow Jones Industrial Average (DJINDICES:^DJI), S&P 500 (SNPINDEX:^GSPC), […]

The stock market rebounded on Wednesday from its late Tuesday swoon. Investors regained confidence that there would eventually be some sort of further economic stimulus package from the federal government, even if it might end up getting delayed temporarily. Gains for the Dow Jones Industrial Average (DJINDICES:^DJI), S&P 500 (SNPINDEX:^GSPC), and Nasdaq Composite all approached 2%.

Yet even on the best of days, there are always a few laggards. Today, it was DraftKings‘ (NASDAQ:DKNG) and Bandwidth‘s (NASDAQ:BAND) turn to bring up the rear. Below, we’ll take a closer look at what made these two stocks miss out on a powerful rally on Wall Street and whether investors should take the moves as red flags about their future prospects. 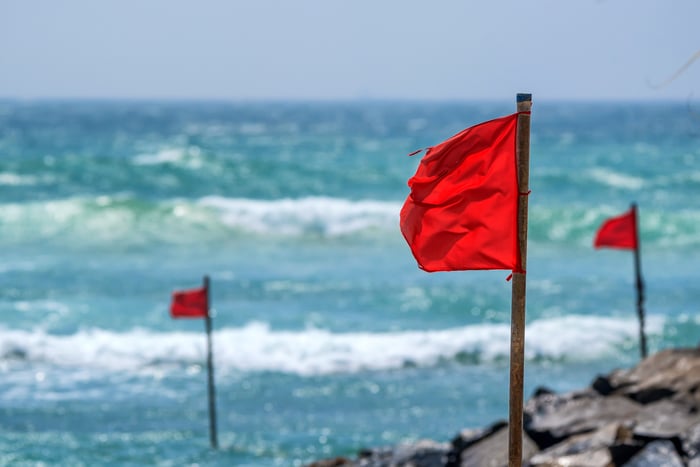 Selling when the market’s buying

DraftKings’ stock finished the day down 6%. The primary culprit: The online betting company’s investors decided it was a good time to tap the capital markets for some cash.

The DraftKings offering was successful in raising nearly $1.7 billion. However, the pricing of the offering left something to be desired in many investors’ eyes. The company ended up selling 32 million shares at $52 each. That was quite a bit below the Tuesday closing price of $56.78 per share, reflecting the size of the offering for a company with a market capitalization below $19 billion.

Moreover, it’s not as though DraftKings will actually see all of that cash. Selling shareholders made up half of the offering, deciding that now was an opportune time to take their gains on 16 million shares of stock.

Even so, long-term investors should be pleased at the more than $800 million that DraftKings should receive from the offering. The cash will help the online betting company with its expansion plans. With rising competition in the space, DraftKings will need all the financial support it can get to stay ahead.

Elsewhere, Bandwidth saw its stock drop more than 7%. The communications platform-as-a-service provider got negative comments from a prominent set of analysts on Wall Street.

Morgan Stanley gave Bandwidth a mixed review in its latest look at the company. The Wall Street giant downgraded Bandwidth’s stock from equal weight to underweight. However, at the same time, it actually boosted its share price target on the stock by $20, setting a new level of $140 per share.

The primary concern that analysts pointed out was that some of Bandwidth’s clients appear to be looking at generating their own competing platforms. That would have two potential downward impacts in that it could drain away revenue from those customers as well as raise the potential for broader disruption of Bandwidth’s growth prospects.

Even with today’s drop, though, Bandwidth shares fetch almost triple what they did at their lows in mid-March. That makes a decline the size of today’s drop insignificant by comparison and shouldn’t detract long-term stock market investors from focusing on longer-term business prospects of the individual companies whose shares they own.

Thu Oct 8 , 2020
(Bloomberg) — In a couple of years, Japan will be paying the highest rates in the world to incumbent power utilities simply for maintaining generation capacity, including coal and nuclear plants, to help meet electricity demand in times of scarcity. That windfall comes at a time when Japan is seeking […]