A Harvard epidemiologist is calling on U.S. Surgeon General Jerome Adams to denounce the criminalization of outdoor activities during the pandemic after he was cited for taking pictures in a Hawaii park. In a tweet Thursday, Dr. Julia Marcus wrote, “Criminalizing the use of parks is counterproductive when risk is […]

A Harvard epidemiologist is calling on U.S. Surgeon General Jerome Adams to denounce the criminalization of outdoor activities during the pandemic after he was cited for taking pictures in a Hawaii park.

In a tweet Thursday, Dr. Julia Marcus wrote, “Criminalizing the use of parks is counterproductive when risk is overwhelmingly indoors.”

She asked Adams to “advocate against misguided policies like these, which disproportionately harm people who lack private outdoor space.”

Honolulu police cited Adams in early August for shooting photos in a park that had been closed by Mayor Kirk Caldwell under an emergency COVID-19 order to prevent crowds from gathering.

Adams was accompanied by two other men during the outing. He had been sightseeing after arriving in Hawaii to discuss the state’s coronavirus response with Gov. David Ige and told police he did not know the parks had been closed.

“Observed Adams in Kualoa Regional Park with two other males standing, looking at the view taking pictures,” a police officer wrote in the citation, according to the Associated Press. “They moved to the center of the park to take more pictures. Adams put his mask on as he walked back toward their vehicle.”

At the time of Adams’ citation, the park was off-limits to visitors except for those traversing it to access its beach, which was open. In mid-September, Honolulu reopened the 153-acre park to the public.

Adams has a remote court hearing via video conference Oct. 21, according to court records. Violating any of the mayor’s emergency orders is punishable as a misdemeanor, with fines of up to $5,000, up to a year in jail, or both.

“We do not have a comment at this time,” Kate Migliaccio-Grabill, a spokeswoman for the Office of the Surgeon General, told the Associated Press on Tuesday.

The Honolulu Police Department said that it has issued 29,000 warnings, 68,000 citations and made 450 arrests for violations of the emergency order, according to CNN.

Since the beginning of the pandemic, only a handful of confirmed cases of outdoor COVID-19 transmission have been documented.

A preprint review released last month by researchers at Canterbury Christ Church University in Connecticut returned 14 sources of evidence of outdoor COVID-19 transmission. But very few examples of such transmissions in everyday life were found among the roughly 25,000 cases examined.

However, they cautioned that the risk of infection rises as crowd size and density increases, as individuals within a group circulate among themselves and as social distancing breaks down. The duration of the gathering also is a factor.

The report has not been peer-reviewed.

Sun Oct 11 , 2020
By Agustinus Beo Da Costa and Willy Kurniawan JAKARTA (Reuters) – Police and demonstrators clashed in the Indonesian capital on Thursday on the third day of protests and strikes against a polarising new jobs law passed in Southeast Asia’s largest economy earlier this week. Hundreds of demonstrators gathered near the […] 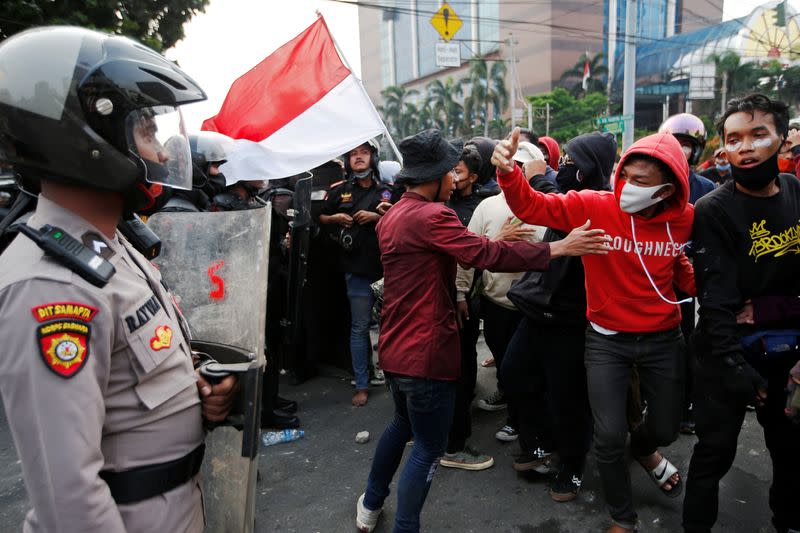