Annual General Meeting of Shareholders of JSC SIA PR Newswire MOSCOW, Oct. 1, 2020 MOSCOW, Oct. 1, 2020 /PRNewswire/ — Shareholders of Sheremetyevo International Airport Joint Stock Company (JSC SIA) approved the company’s annual report for 2019 and elected a new Board of Directors and Audit Committee, among other decisions, on September 30 at the […]

MOSCOW, Oct. 1, 2020 /PRNewswire/ — Shareholders of Sheremetyevo International Airport Joint Stock Company (JSC SIA) approved the company’s annual report for 2019 and elected a new Board of Directors and Audit Committee, among other decisions, on September 30 at the annual General Meeting of Shareholders.

The company reported that 2019 was a milestone year in the planned infrastructure development and comprehensive modernization of Sheremetyevo Airport, one of the largest aviation hubs in Europe.

The airport has begun executing the second phase of the Long-Term Development Program. Capital investment at the end of the year reached 36.6 billion rubles, with Terminal C for 20 million passengers annually, a multi-level parking lot for 2,500 cars, and a new apron for aircraft parking constructed and commissioned.

A 49-year concession agreement with the state was executed in order to create, reconstruct, modernize and overhaul airfield facilities at the expense of extra-budgetary investments. JSC SIA will invest about 71.4 billion rubles ithin the framework of the agreement,.

An independent third runway was put into operation in September 2019 at state expense, making it possible to increase the airfield’s capacity from 65 to 90 takeoff and landing operations per hour. RWY-3 will provide an opportunity for long-term development of Sheremetyevo-based air carriers and attraction of new airlines to the airport.

The airport has been a leader in Europe in terms of the quality of passenger service over the past several years, according to the ASQ (Airport Service Quality) global rating program of the International Airports Council. It has been the world leader in punctuality of flights, according to the international industry ratings of the British research company OAG (category Mega Airports) and the aviation-industry analytical organization Cirium (category Global Airports). In 2019, Terminal B of Sheremetyevo Airport was awarded the prestigious international “5 star” rating by Skytrax, the highest possible rating.

At the end of 2019, Sheremetyevo showed a record growth in key performance indicators while maintaining high punctuality in flight operations. The number of passengers served increased by 8.9% compared to 2018 and reached 49.933 million, and it hosted 386,370 takeoff and landing operations, an increase of 8.2%. As a result, Sheremetyevo strengthened its leadership in the Moscow air hub, servicing 48.6% of the total passenger traffic and providing 49.4% of the Moscow Air Transportation Regional Cluster’s takeoff and landing operations.

The key factors for the growth of passenger traffic and freight traffic at Sheremetyevo in 2019 were: the increase in passengers and the expansion of the route networks of Aeroflot and other aviation partners, the progressive growth of the airport’s transfer passenger traffic and the arrival of new air carriers (Brussels Airlines, Vietnam Airlines, Belavia, Turkish Airlines Cargo). In 2019, 19 new domestic and international destinations were opened, and the route network as a whole reached 230 destinations.

The airport handled more than 330,000 tonnes of cargo at the in 2019, an increase of 6.8%,  and 49,500 tonnes of mail, an increase of 37.4% compared to 2018. The main cargo operator of Sheremetyevo Airport, Moscow Cargo LLC, handled more than 275,000 tonnes of cargo and mail, a 12% increase compared to 2018. The Moscow Cargo company strengthened its position as a leader among the cargo aviation complexes of Russia, handling 48.3% of the total cargo turnover at the Moscow Air Transportation Regional Cluster’s airports and 23.4% of the total volume of air cargo transportation in the Russian Federation.

JSC SIA achieved significant growth in financial performance in 2019. The main indicators, achievements and financial results of SVO JSC and Sheremetyevo Group for 2019 are reflected in the Annual Report on the official website.

The JSC SIA auditor for the reporting period of 2019 is Ernst & Young LLC.

The General Meeting of the JSC SIA shareholders approved the annual accounting (financial) statements. Taking into account the current economic situation, the shareholders decided not to distribute profits and not to pay dividends on shares, but rather to leave funds at the disposal of JSC SIA to finance current activities and investment projects.

At the meeting, the following people were elected to the Board of Directors of SVO JSC:

The shareholders elected the same members to the Internal Audit Commission of JSCSIA:

Ernst & Young LLC was approved as the auditor of JSC SIA for 2020.

Are you willing to take up any job in the UAE?

Sun Oct 4 , 2020
Recruitment firms said in many cases, employers are either rejecting profiles or offering lower salaries because of lacking skills Image Credit: Stock image. For illustrative purpose only Dubai: Call it coincidence or a response to the challenging times amid the pandemic, jobseekers in the UAE are increasingly scouting for opportunities […] 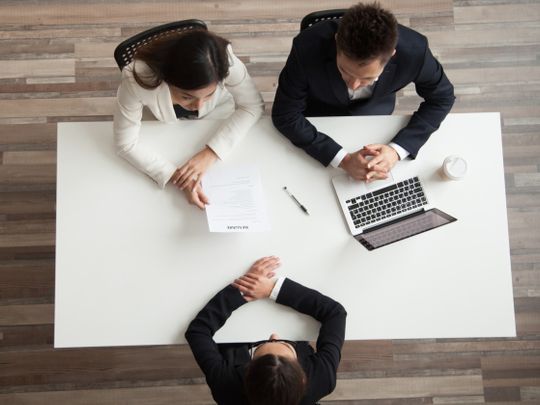